In between swimming with fish and watching the liquid gold sunset, I took time to start jotting down impressions of Kaua’i and to read a short story by Jack London set in Honolulu.

You think you’ll remember…every wonderful thing…every odd characteristic. But you won’t. You’ve got to jot them down. It’s not really one of my favorite forms of writing, but I always appreciate it later. As for Jack London, when I walked into that Westernmost bookstore in the U.S.A, Talk Story Bookstore, the first thing I encountered was collection of short stories by Jack London inspired by his travels in the islands. I found this particularly amusing since he lived just 17 miles from where I live in California…and here we run into each other in the middle of the Pacific Ocean! Of course I bought the book. More to come on that when I finally write about it on my new website.

Now, after a day of red mud, lush mountains, ahi ahi and rum, I’m about to climb into bed and read some more of Ginger Torch…just as the very independent roosters on the island start crowing…because they can. For those of you not following my Instagram account, here are some of those impressions from our daily adventures.

Kaua’i is famous for its red dirt. I’m happy to say we’ve been getting it all over the Jeep!

More red dirt…and those roosters I mentioned. In the 1990’s there was a hurricane which freed a slew of chickens. They’ve never been recaptured and their numbers have only grown. There is no more free-range chickens than these! 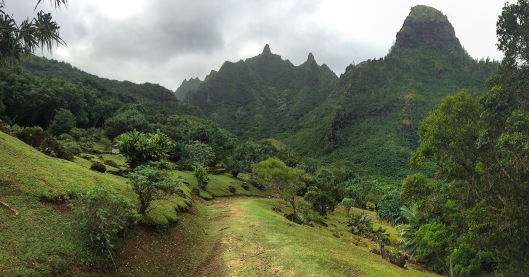 Limahuli Botanical Gardens on the North Shore near where the road ends (there is no road which circumnavigates Kaua’i). You expect to see a herd of brontosaurus rex saunter by.