After the burglary, our house felt like a giant target, and now a fortress…but not exactly “home-y” the past two weeks. We’ve also been so busy dealing with all sorts of matters, burglary-related and not, that we haven’t gone grocery shopping since right before it happened. So, though I’m still trying to get used to the new alarm system’s voice (we definitely need to name her), tonight I decided to do a little nesting (the kind that doesn’t involve a baby).

After a whirlwind day at work, I took my time going up and down every single grocery aisle. No list…I just bought what looked good. Then I came home, restocked the larder, and did this…decorated with twinkle lights! 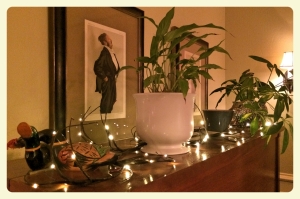 Even the picture of it makes me happy. Of course, I just turn my head to the right and there they are, bright as life, atop the piano, which I believe I will finally get tuned for my upcoming birthday…if I don’t rent a violin instead.

I’m not quite ready to tackle world domination again, but I’m feeling more restored after the past couple days, and am already eyeing all my ambitions which I temporarily left in a heap on the floor of the blue room. Tonight, I took time to get caught up on all the issues of Sapling that I hadn’t yet read…just a few. Still, I was glad to honor the subscription in which I’d invested, and took my time reading about upcoming contests, featured literary magazines, and interviews with editors and writers. I also joined the Redwood Writers Branch Yahoo email group. Even the name sounded daunting, but in the end, it was quite easy and will hopefully get me off to a good start in 2015.